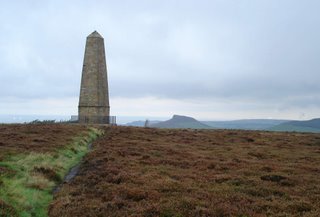 It's Wednesday, and I've just written up the walk I did yesterday. I actually walked from Kildale (on the edge of the North York Moors) up to Captain Cook's Monument (pictured) then across Great Ayton Moor skirting around Lonsdale before heading back to Kildale across Percry Cross Rigg. Six-and-a-half miles that took me just over 2 hours. The views from the Monument were superb with the Cleveland Hills rising steeply up from the Cleveland Plain with Roseberry Topping clearly visible to the north. James Cook was born at Marton in 1728 (now part of Middlesbrough) and then went to school at Great Ayton, near Kildale, before being apprenticed in Staithes and then Whitby. During the 18th century, he embarked on three of the greatest journeys of discovery to New Zealand, Australia, Antarctica and the Pacific islands before being killed on Hawaii in 1779. This walk will appear in this week's Northern Echo (www.thenorthernecho.co.uk/leisure/walks)
Posted by Mark Reid at 6:12 AM