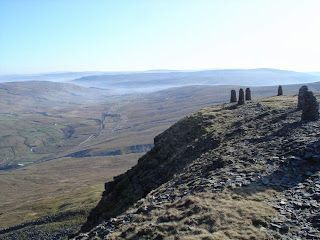 Winter, potentailly, offers the best walking conditions of all. But in recent years, our changing climate means that the days are more often than not characterised by dull, windy, grey and damp weather, rather than the ideal of crisp, cold, clear and bright days with snow covered tops.

After several weeks of damp and windy weather, we have recently been blessed with very cold, crisp and bright days. The visibility has been superb.

Last Monday I decided to walk across Wild Boar Fell that rises up as a wall of jagged crags high above the Mallerstang Valley in the western Yorkshire Dales. This is a summit I have been meaning to reach for a number of years but, because it's Open Access Land all the way, I have been waiting for the right conditions and good visibility before tackling it.

I was not disappointed for this is, in my opinion, the finest fell-top in the whole of the Yorkshire Dales (and I've walked up almost all of them!) with one of the finest views in the North of England from its broad summit plateau. Walk to the eastern edge of the plateau and you come rather suddenly to a line of cairns along the crest of High White Scar and a spectacular view across the Eden Valley. Across the valley are the scars of Mallerstang Edge with Great Shunner Fell rising up in the distance, whilst to the south-east are the hills of Upper Wensleydale. Sweeping south, the Yorkshire Three Peaks rise up above their neighbours then further west are the Howgill Fells with the Lakeland peaks on the horizon. The Nab juts out from the plateau’s northern tip and offers another unrivalled viewpoint. If you want to ‘bag’ the summit, the Trig Point lies some distance to the west in the middle of the broad plateau. Wild Boar Fell was where, according to legend, the last wild boar was killed in England.
Posted by Mark Reid at 6:31 AM 2 comments: