The proposed route of "The Inn Way to the Peak District" is at last starting to take shape. After 2 years of research, I've now decided upon an 83-mile circular walk over 6 days via 53 pubs (give or take a couple!). The route is planned, I'm ready to walk it... I just need the days to start getting a bit longer so there's enough daylight to walk 16 miles! Actually, I badly sprained my ankle playing football at the beginning of December and it has taken 6 weeks to even start to heal, so I'm limited to about 6 miles of walking at the moment. It's getting better every day, so hopefully I'll be striding out across the Peak District by early February.

To give you a taster of the route, it will take in Kinder Scout, Hathersage, the Eastern Edges, Stanton Moor, Youlgrave, Millers Dale, Tideswell, Eyam, Castleton and Edale. Here's an inspiring photo of Kinder Scout... 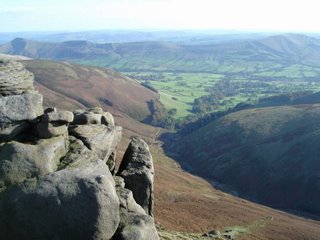 Anyway, the book is going to be published in April (hopefully!), so keep checking www.innway.co.uk for updates