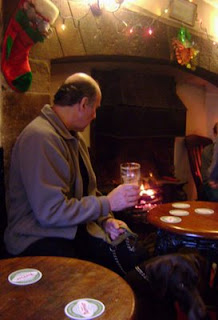 The Ale Trail - Pub Reviews, as featured in the Yorkshire Post

By Mark Reid, author of ‘The Inn Way’ guidebooks

On the trail of Yorkshire’s great country pubs, where walkers are welcome,
beer is in tip top condition and the food is hearty and wholesome.
Cover Bridge Inn, East Witton, Wensleydale

Looking for a great Christmas pub walk? Look no further than the Cover Bridge Inn, one of Yorkshire’s great walkers’ pubs. The 7-mile circular walk from the pub along the banks of the river Cover and then the Ure to the romantic 12th Century ruins of Jervaulx Abbey, over Kilgram Bridge to Thornton Steward and back passing the ancient Church of St Oswald, the oldest in Wensleydale, offers a magnificent combination of inspiring landscapes, monastic ruins and a welcoming pub at the end. It is the layers of history that surround you, and a keen eye to spot them, that bring the landscape alive. The monks of Jervaulx began cheese-making back in the 1100s, the recipe for which has remained in the area ever since and is now known as Wensleydale Cheese. The village of Thornton Steward was once the home of the steward of Alan the Red of Britanny, Norman earl of Richmond and nephew of William the Conqueror. The Cover Bridge Inn stands between the ancient fords across the Cover and Ure along a road that probably dates back to Roman times.

After an early start, I arrived back at the Cover Bridge Inn at lunchtime, my appetite well and truly whetted by muddy paths and ecclesiastical history. I have been to this pub many times before and it never changes, which is part of its charm. The first hurdle for any newcomer is actually getting into the bar, for the door latch takes a bit of fathoming out, much to the amusement of the locals. I bagged the table beside the inglenook fireplace, which was well stoked up with coal and logs, and then I began the difficult task of choosing one of the seven real ales on draught. The landlord obviously takes great pride in his beer with local brews on sale and eight framed CAMRA awards behind the bar. Well, when in Rome... I chose a pint of Yorkshire Dales Brewery’s Butter Tubs (ABV 3.7%, £2.50 a pint), brewed in Askrigg a few miles up Wensleydale. Excellent condition, just the right temperature with a rich amber colour and dry hoppy flavour that preceded a lingering bitterness. But I wasn’t just here for a liquid lunch, so I ordered the famous Ham & Eggs - as seen on TV, as the sign outside proclaims. The bar had a very relaxed atmosphere with a handful of locals at the bar and a party of walkers in the adjoining dining room. It was then I noticed the stone carved bust of a strange horse-like creature in the alcove. This was the legendary Kelpie, whose name is derived from the Celtic word for ‘water horse’, an evil spirit that is said to rise from the foaming waters at the confluence of the rivers Cover and Ure at dusk to stalk its victims before pursuing them into the water. I think I’ll stay put by the fire!

Walkers Welcome?
Dogs welcome in the bar, but muddy boots should be left in the porch.
TEXT COPYRIGHT MARK REID 2008
Posted by Mark Reid at 3:25 AM